Horseman, auctioneer, bloodstock agent, sales producer, all of those titles fit Ben Emison,a prominent figure in the world of Western performance horses for the past 50 years.

This week, Emison, a founder and co-owner with Milt Bradford of premier performance horse sales company Western Bloodstock, took on a new title as co-author of The Search for Hannah Lea, a crime thriller published by CreateSpace and available through amazon.com.

“I’ve always been somewhat of a dreamer,” said Emison, who fleshed out the bones of what would become The Search for Hannah Lea twenty-five years ago. “I had a vivid imagination, but not really the time to do anything with it. When I got involved with training and showing and then Western Bloodstock, I laid everything else aside.”

In 2006, Emison, who lives in Weatherford, Tex., attended his 50th high school reunion in Caraway, Ark., a small farming community in northeastern Arkansas, and reconnected with schoolmate Jerry Branscum. “We discovered that he was interested in writing, too,” said Emison. “So later he came to visit us in Texas and we began to go through my dead book file.

“Everything I had written was in long-hand, in notebooks or legal pads, and after (Jerry) skimmed through (The Search for Hannah Lea), he asked if he could take it home and write with me, and I said, ‘Yes, of course.'”

Emison, who was raised on a farm and grew up “behind a team of mules,” dreamed, when he was in high school, of a career as a hands-on cowboy. Branscum, however, pursued a career in agri-business that eventually took him around the world.

“Jerry was always the whizz kid in school and this (book) would not have worked without his help,” said Emison. “I excelled in ag, and was intersted in history and geography, but I didn’t like English and they kicked me out of typing. I had the imagination, but not the education to do anything with it.”

Emison’s plot and and Branscum’s story line come together in a perfect pitch in The Search For Hannah Lea. 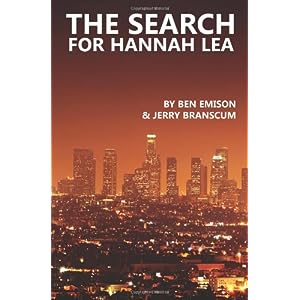